As a graphic designer, I spend a lot of time thinking about formats. Not only of file formats, but of mediums—the possibilities and limitations of them, or their contextual uses. In Statement and Counter-Statement by the Dutch design studio Experimental Jetset, the trio comments on how a standard LP can only contain 45 minutes of music, acting as a creative limitation in a very physical manner–leading to the classic discussion around the relationship between form and content: “This is also what we consider to be one of modernism’s most defining characteristics: this state of being permanently aware of the way in which our material environment shapes us, and how we, in return, can shape our own material environment.” I love this idea of our physical world acting as a constraint, and I’m really interested in how certain formats have shaped us—and how we can consider shaping them in new ways. 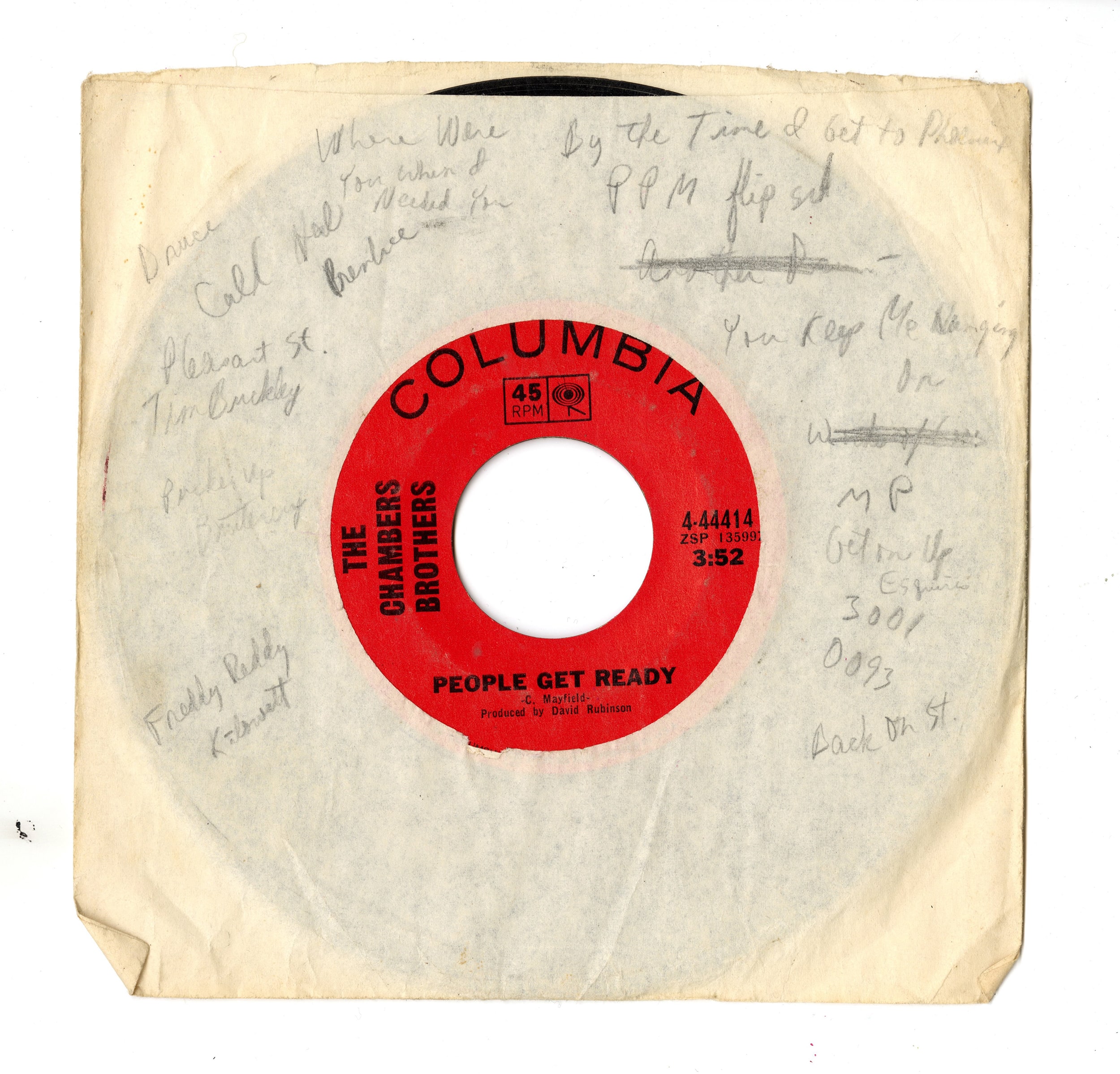 A hand-written playlist by Jeffery Miller, one of four students killed by the National Guard at the Kent State shootings on May 4, 1970.

For the last few months, I’ve been working on a pop-up exhibition project called “Armed with Our Voices” with the Kent State University’s May 4 Visitors Center and Wick Poetry Center about the May 4, 1970 tragedy. The exhibition features memorials to the four killed that day, specifically archival and personal artifacts that are now on display or tucked away in the University’s Special Collections and Archives.

One object which has stuck with me throughout the project is a handwritten playlist written by Jeffery Miller on the Chambers’ Brothers “People Get Ready” 45rpm vinyl. Miller hosted a radio show called “Short Mort,” and often utilized his personal collection. This object, now in a display case, is so personal—and now deeply painful to view. Ben Ratliff has said that “we build an autobiography and a self-image with music.” I think this is why there is pain in listening to the songs written on Miller’s 45. But it got me thinking about how playlists have changed as a format: from something very intimate, tangible, and crafted, to something more public, ordinary, and thrown together.

The playlist was really born out of the mixtape, which grew to popularity in the late 70s and into the 80s as cassettes grew in popularity. When people used to make mixtapes—a compilation of music recorded to a cassette tape—they could only be drawn from personal collections of things someone already owned—things which existed as a part of the physical world. They became a special type of communication from one person to another, often codified through track listings, or customized with personalized cover art.

In contrast, contemporary playlists have become streamable, and our access to music has grown significantly into a global digital library. They are still very personal, though not as popularly exchanged. Playlists often become symbolic of a particular season of life, or are made up of music that has a certain aesthetic flow or coherence. I’ve heard people mourn the loss of mixtapes in the age of streaming, and I wonder if this is because they lack the vulnerable aspects of knowing an LP or a tape inside-out. Spending money on music, or keeping it in your bedroom for that matter, makes the exchange of mixtapes a special sort of gift. In “PCs killed the mix-tape star,” Joel Keller writes: “The process of making a mix tape gave people a connection with music that the electronic version simply can't replace. Because it is so easy to drag and click a mix into existence, the sense of satisfaction with making what many feel is a work of art gets diminished.”

Mixtapes and playlists require active listening both from the creator and the listener. They require full attention since they are a special combination of genres or styles, or since they might be codified by the maker in some way. This active listening has perhaps become a lost art after the evolution of The Walkman, which made music private and portable, thus removing it from rooms where the only available entertainment was a record player or reel-to-reel player. Listening to music as a primary activity has now transitioned to serve as a background for cooking, riding the subway, working, and the like.

At first, I was thinking of how much we’ve lost because of this change in format from personal cassette to streamable playlist. But I was refreshed as I started reading Every Song Ever: Twenty Ways to Listen in an Age of Musical Plenty by Ben Ratliff. He asks an important question in an age where algorithms instead of people often determine the formations of our playlists: “How are we going to listen better than we are being listened to? […] There is a possibility that hearing so much music without specifically asking for it develops in the listener a fresh kind of aural perception, an ability to size up a song and contextualize it in a new and personal way, rather than immediately rejecting it based on an external idea of genre or style.” In other words, now that we have such a vast library of music to listen to—from other civilizations past and present, from around the world—how can we deepen our musical vocabulary? How can we utilize the tools at hand to expand the format of the playlist—keeping that same sense of craft that physical mixtapes once required? Can we make them more personal in new ways? How might this determine the ways we share them with the people we love? More importantly, how can playlists make us better listeners?

A Morning in the ValleyProject type

Why I am Starting a BlogProject type